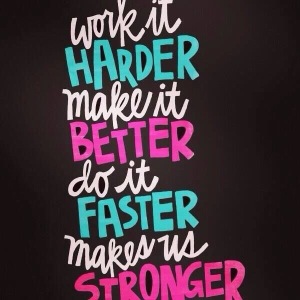 After my most recent relapse, my walking and balance was very badly affected. I had very tingly feet and as a result gained what I called a gangster limp. My left side was very weak and I had electric shock sensations going from the back of my knee to my lower back. Part of my treatment was taking oral steroids for a course of 5 days and I was also referred for Neuro Physio at the local health centre by my MS nurse.

This is the 2nd time that I’ve had physio sessions here, so I had an idea of what I could expect. However I was a lot weaker this time and I was worried that I would be stuck with the limp as long term damage as a result my relapse.

At my first appointment, I was on my last few days of steroids, so I inevitably felt rubbish anyway. Steroids can leave you feeling really weak and fatigued; although they can help in the long run. With this I found any exercises physically very challenging and I was worried that I wouldn’t be able to do much at all.

My physiotherapist Katy, was very kind and could tell that I was struggling. Our first session together was mainly spent discussing what my relapse had caused physically and what I wanted to work on in my sessions. My main focus was for my walking to improve and for my confidence to be restored. I was worried about having falls with my weakness being the way it was. I also wanted to get back to running again, as well as for my vertigo to improve. 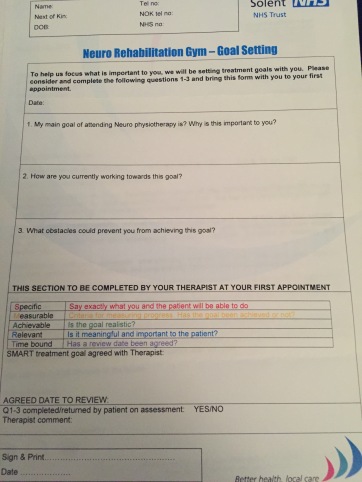 She did a few strength tests to see where my weaknesses were and it became clear very quickly that my left side had been damaged by my relapse which is why I was experiencing the tingling and limping. She timed how quickly I could walk from one end of the room to the other. Even this made me feel nervous that I would trip and fall over. To start with, she gave me a sheet of gentle exercises to practise at home. The first thing she wanted me to tackle, was to improve my core strength to help with all aspects of my recovery. I did exercises such as bridging and pelvic tilts to start with. 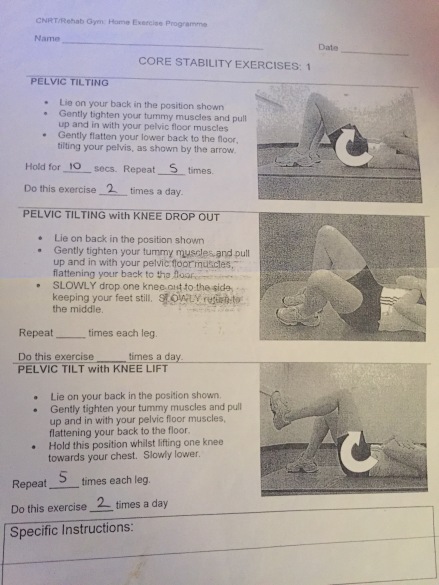 I wasn’t sure that there was anything that could be done for my vertigo and balance issues. I do take tablets regularly to keep my vertigo as normal as it can be, but with this relapse it had significantly worsened. She advised that there was some exercises that could train my eyes and brain to work together as again; the signals from my brain had been getting muddled and confused because of my relapse.

Katy advised me to try something called Cawthorne-Cooksey exercises. These involve things such as looking from left to right, moving your head left to right and picking things up from the floor whilst sitting down. Sounds simple right? Not when you feel like you are already on a roundabout! At first I struggled with a lot of them and they made me feel very weird, almost to the point of feeling nauseous. After time though, this improved and I would recommend giving it a go if you are experiencing similar symptoms.

After a few sessions of gentle strengthening exercises and CC exercises, I then spent the rest of my sessions in the rehab gym. As well as Katy, I also worked with Simon a student doing work experience for physiotherapy. Just like Katy, he was encouraging and friendly and helped me so much. My first sessions at the rehab gym were mainly based on the plinth working on my core and balance exercises to make sure that I was as strong as possible. I even went back on a treadmill to see how my walking was looking. For a long time, I couldn’t go onto the treadmill without gripping onto the handrails for dear life. The treadmill wasn’t even set to a running pace, just a gentle walk but I could still feel my left side being more slanted and wonky; it was even physically visible to the physiotherapists! 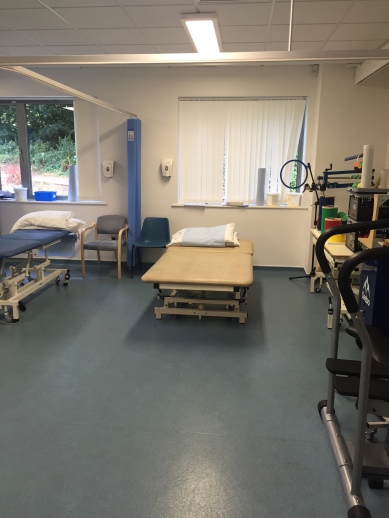 Floor work I found to be really helpful, especially the happy and sad cat! Sounds completely nuts, but I found this the easiest way for me to tune into my core and be aware of how to balance myself; something that I struggled with in the beginning of my recovery. This was also an exercise that I used a lot the first time I went to the physio sessions in 2014. I also used exercise balls and ankle weights which I only had access to use at the gym, though I do intend on buying a set of these because again; I found these so beneficial.

The more I grew in confidence, the more challenging my exercises became. I was given what I felt was my ultimate challenge – the wobble board. Now these aren’t easy at the best of times, let alone when you are having to throw a ball to and from the physio. My body had to get used to coordination and balance all at the same time.

For my lower limb strength, I was given Therabands which were strapped to my ankle and a support.  These are designed to test resistance – they are like a big elastic bands colour coded for different levels of resistance and used by pulling your limb away from the point they are tethered and then maintaining resistance as you move it back. I started off on yellow and eventually progressed to red and green. I had my own bands that I could use to practise with at home and these are tied to the end of my bed posts. They are quite hard to ignore before I go to bed, so I tend to use these quite frequently.

As the weeks went by, I found that I was pushing myself harder to do the exercises for longer periods or doing more within my sessions in general. As I did my physio before work when I had returned to work again, both Katy and Simon were very aware that they did not want to tire me out as I was becoming a lot more fatigued. They were really good at knowing my limits and adapting my routine if I was feeling particularly worse one day. Many of my sessions were hard as I was also coping with work stress and this noticeably affected my recovery as they both said that I was visibly shaky and this definitely slowed me down.

Once things had settled down we went back to everything at full speed and I was happy that I was being pushed with things such as the mini assault course that we used to do. Jumping, hopping, skipping, walking on tiptoes, bounding, running and going up and down stairs; made me feel like I was making huge steps in my recovery. I was even able to go on my first run through the common for the first time in forever. This for me was massive and I am still so proud as to how far I’ve come. The physio’s even saw a difference when I was able to go onto the treadmill without holding on and I was so chuffed!

I would highly recommend neuro physio if you are experiencing similar problems to me. I have found it to be so beneficial and I can see such an improvement in my confidence and strength which were the main areas that I wanted to work on. Contact your GP or MS nurse to see if this is available in your area 🙂 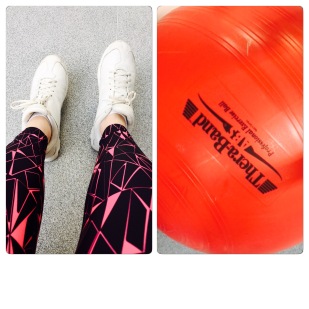 2 thoughts on “Work it harder, make it stronger”